Management of entero-atmospheric fistulas by chyme reinfusion: A retrospective study

Background & aims: High output entero-cutaneous fistulas may lead to intestinal failure with parenteral nutrition (PN) as the gold standard treatment to prevent dehydration and malnutrition. However in case of entero-atmospheric fistula (EAF) with the distal limb of the fistula accessible, chyme reinfusion (CR), a technique that restores artificially digestive continuity can be performed until the surgical repair. Our aim was to study the efficacy of CR in EAF regarding nutritional status, intestinal function, PN weaning and liver tests. Methods: Retrospective study of 37 patients admitted for EAF and treated by CR from 1993 to 2017.Delays were expressed in median (25%-75% quartiles) and other data on mean ± SD. Results: Location of EAF: jejunum (29), ileum (8). The length of the upstream intestine was estimated in21 patients: 19 had a bowel length <150 cm of which 16 had less than 100 cm. During CR, mean digestive losses decreased from 1734 ± 578 to 443 ± 487 ml/24 h (p < 0.000001), nitrogen absorption increased from 45.3 ± 18.6 to 81.8 ± 12.9% of ingesta (p < 0.001). The percentage of patients with plasma citrulline<20 mmol/l decreased from 71 to 10%. PN was stopped in all patients within 3 (0e14) days after CR initiation, 2 patients required an intravenous hydration and 20 had an additional enteral support. The nutritional status improved: albumin (33.1 ± 5.1 g/L vs 28.4 ± 6.5, p < 0.001), NRI (decrease of the number of patients at risk of severe malnutrition from 22 to 10 (p < 0.001)). The number of patients who had one or several liver tests abnormalities (>2 N) decreased from 94 to 41% (p < 0.001).Conclusion: When the efferent part of the small bowel is accessible, CR is a safe and inexpensive method that restores bowel function. In most cases, it makes it possible to stop PN and helps to improve the nutritional status until surgical reconstruction. 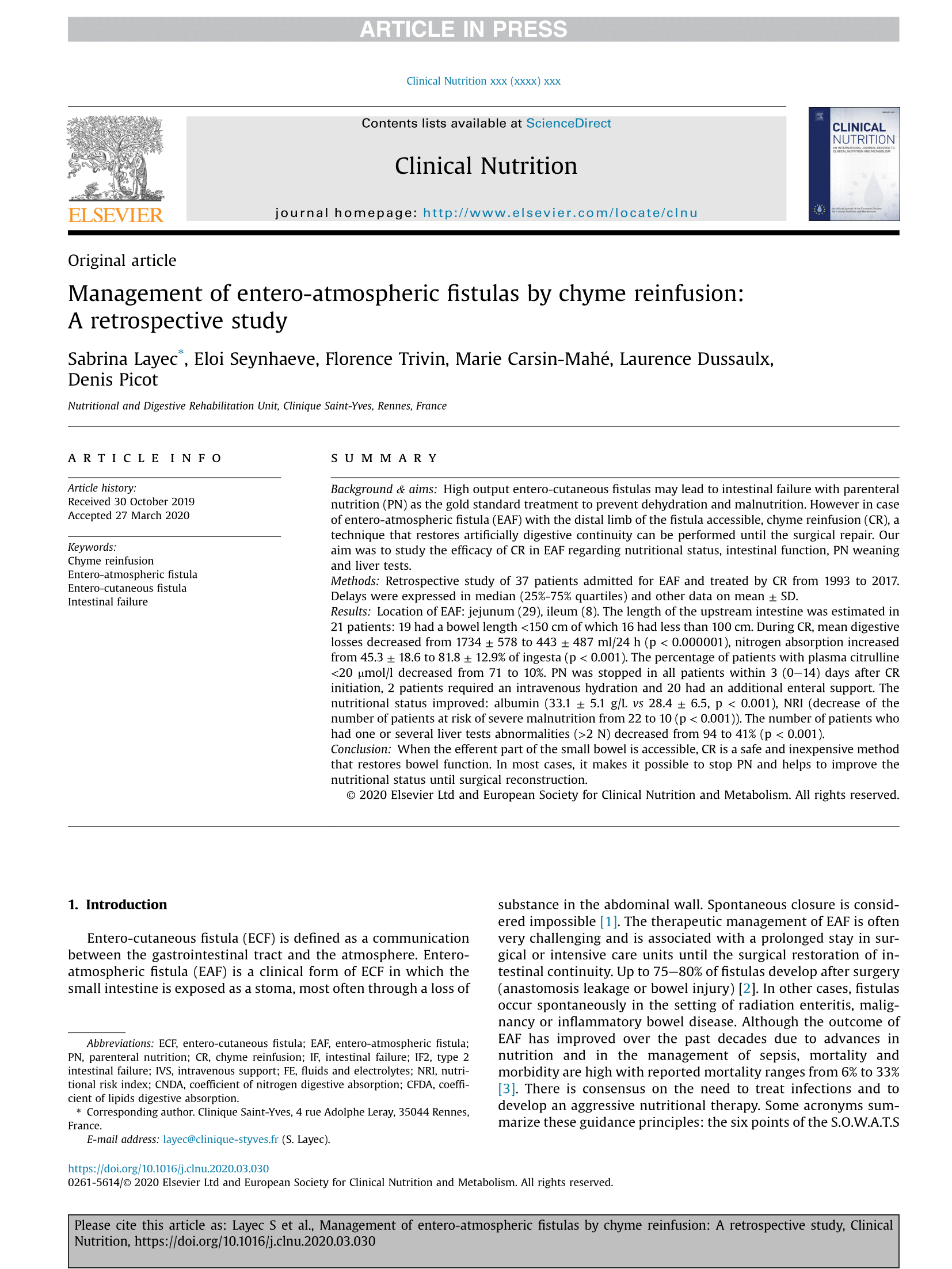